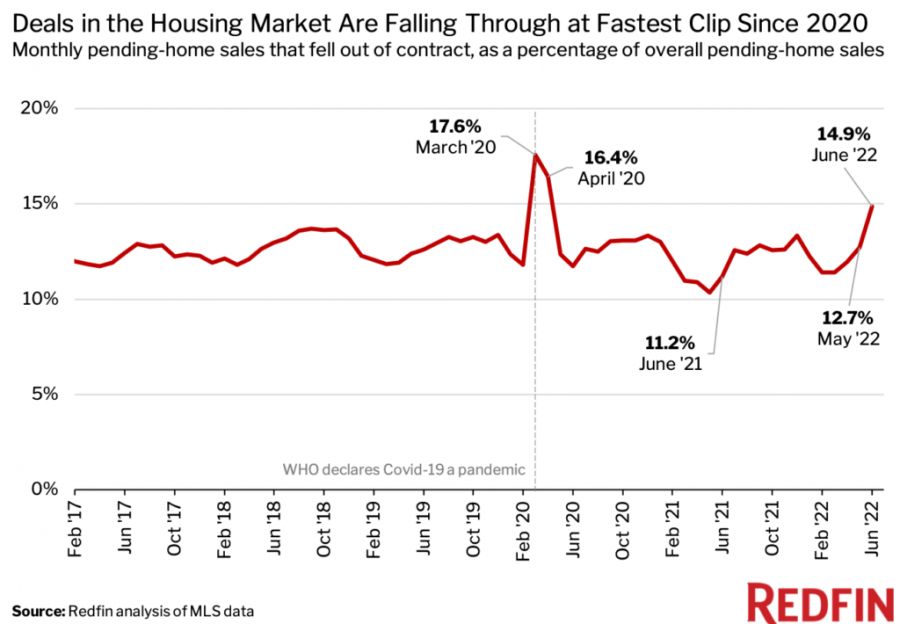 Home Sales Are Getting Canceled At Highest Rate Since Pandemic

High mortgage rates appear to be taking their toll as Redfin finds that 60,000 home-purchase agreements fell through in June. That figure is equal to 14.9 percent of homes that went under contract last month.

That’s the highest percentage on record with the exception of March and April 2020, when the market all but ground to a halt due to the onset of COVID. For comparison, May’s cancel rate was 12.7 percent, while May 2021 was 11.2 percent.

“The slowdown in housing-market competition is giving homebuyers room to negotiate, which is one reason more of them are backing out of deals,” said Redfin Deputy Chief Economist Taylor Marr. “Buyers are increasingly keeping rather than waiving inspection and appraisal contingencies. That gives them the flexibility to call the deal off if issues arise during the homebuying process.

“Rising mortgage rates are also forcing some buyers to cancel home purchases,” Marr continued. “If rates were at 5% when you made an offer, but reached 5.8 percent by the time the deal was set to close, you may no longer be able to afford that home or you may no longer qualify for a loan.”

Las Vegas saw the largest share of cancelled deals last month at 27.2 percent. The rest of the top 10 was made up almost entirely of cities in Florida.

Here in California, Riverside saw the most cancelled deals of the major metro areas with 20.9 percent. Sacramento and San Diego were close behind at 19.8 and 19.5 percent, respectively.