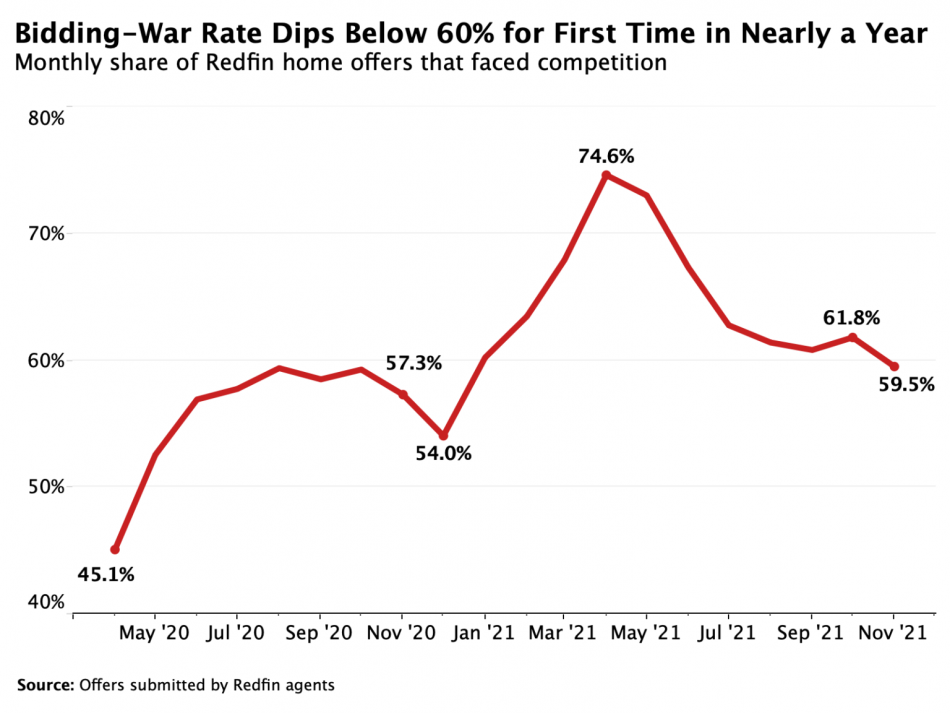 Buyer Competition Down In November

Can the drop in homebuyer competition be explained by holiday distractions? That’s the theory being presented by Redfin, which saw a small but significant slow in November.

According to new numbers, 59.5 percent of Redfin home offers faced bidding wars last month—the lowest rate in nearly a year. That’s down from a revised rate of 61.8 percent in October and a pandemic peak of 74.6 percent in April.

“It’s typical for competition to ease in the winter months as more families take time off for the holidays,” said Daryl Fairweather, Redfin Chief Economist. “While competition waned in November, it was still higher than a year earlier, which is a sign that demand will be strong in the new year.”

Richmond had the highest bidding-war rate of the 44 U.S. metropolitan areas in Redfin’s  analysis, with 80 percent of offers written by Redfin agents facing competition in November. Salt Lake City and San Diego were close behind with 73.8 percent and 72 percent competitive bids, respectively.

The San Francisco/San Jose area was also a competitive market in November, with 68.4 percent of offers facing competition in November. That’s down from 69.9 percent in October 2021. Sacramento was close behind at 67.5 percent.

Los Angeles saw a decent drop in competitive offers at 58.4 percent in November, down from 64.5 percent the month prior.

Listing of the Day: Double Lot Luxury In Malibu