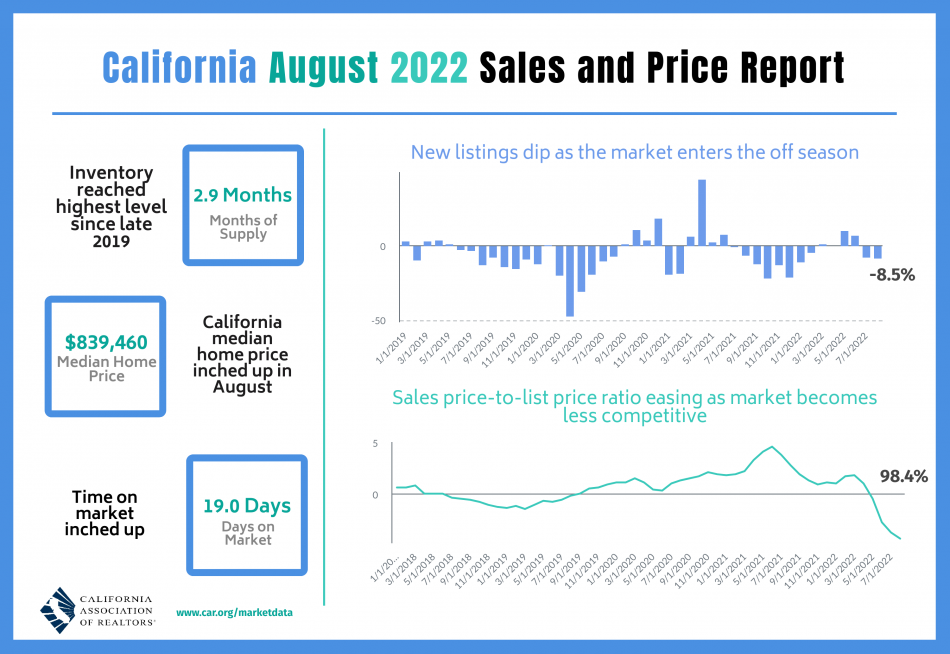 Existing-home sales saw a nice rebound in August, according to newly released numbers from the California Association of Realtors. Following five months of declines, sales across the Golden State were up 6.1 percent last month to an adjusted rate of 313,540 transactions.

August’s monthly sales increase was higher than the long-run average of 0.4 percent for a July-August period in the past 43 years. Compared to August 2021, however, sales were down some 24.4 percent.

The year-over-year price gain was the smallest in more than two years.

“California’s housing market stabilized briefly as a temporary reprieve on mortgage rates in July and early August brought buyers into the market,” said CAR President Otto Catrina. “Active listings have passed their annual peak, and while homes are taking slightly longer to sell, the share of homes seeing price reductions has also stabilized to near pre-pandemic levels. In fact, price growth in August actually picked up on both a monthly and annual basis, and pending sales suggest a bounce-back for homes priced $2 million and above.”

More than two-thirds of all California counties experienced a year-over-year increase in their median prices, but their growth rates have been decelerating in the past three months. At the regional level, sales continued to fall sharply on an annual basis. Stay tuned for our regional wrap up…