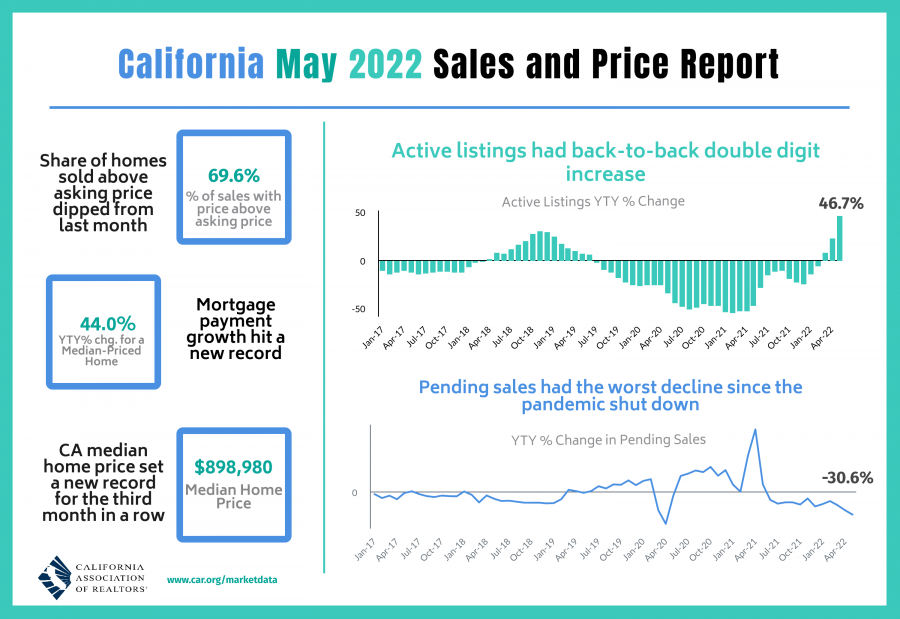 California Home Sales Down 9.8 Percent In May

California’s existing-home sales reached their lowest level since June 2020 last month, marking the largest year-over-year decline in five months, according to the California Association of Realtors.

“We’re beginning to see signs of a more balanced housing market with fewer homes selling above list price and homes remaining on the market a little longer than in previous months,” said CAR President Otto Catrina. “What this tells us is that there is slightly more supply, fewer- and less-intense bidding wars, and those who’ve experienced ‘buyers’ fatigue’ may now have a window of opportunity.”

California’s median home price set another record in May at $898,980, 1.6 percent higher than the April median price and 9.9 percent higher than the $818,260 recorded last May. The share of million-dollar home sales increased for the fourth straight month and reached the highest level on record at 35.3 percent, while home sales priced below $500,000 dipped again in May and hit the lowest level of all time.

On a regional level, Southern California sales were down 14.3 percent last month compared to May 2021, while the Central Valley fell 12.2 percent. The San Francisco Bay Area was down 11.5 percent, while the Far North was down just 4 percent.

Stay tuned to CaliforniaListings.com for more analysis on both NorCal and SoCal’s sales and pricing.

Listing of the Day: Fairfield Single-Story With Detached Studio

Email me when new replies get posted.
Powered by Forym