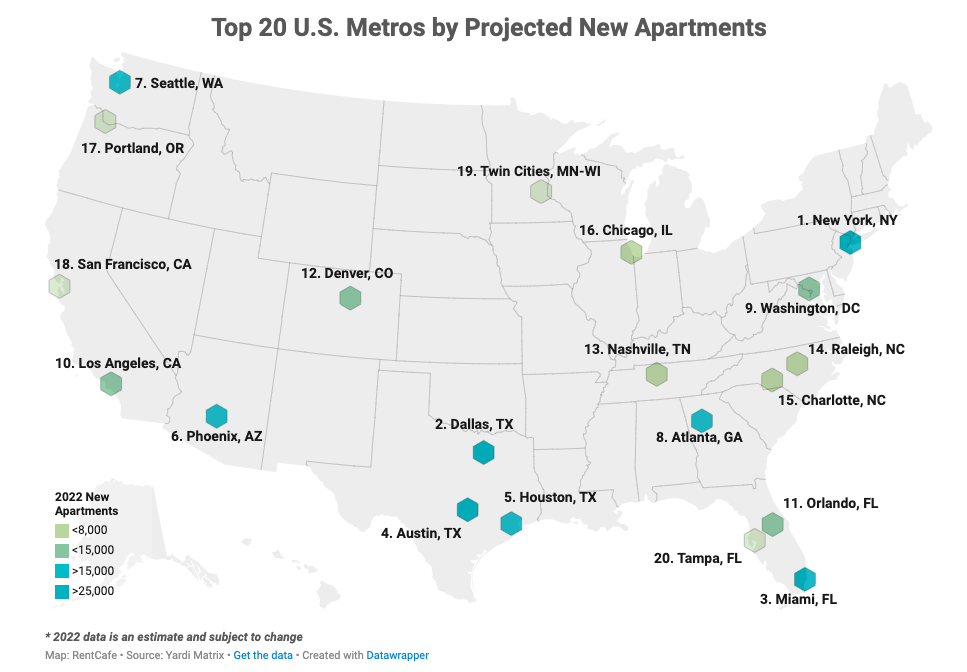 The last time national apartment deliveries topped 400,000 units, Richard Nixon was President and the Dow Jones closed above 1,000 for the first time in history. We may not be stepping back in time, but the number of new apartments hitting the national market is about to break a 50-year record…

According to RentCafe, new apartment construction completion will top 420,000 units this year in a boom driven by pent-up demand for apartments nationwide.

New York metro is projected to deliver the most apartments in 2022, knocking Dallas-Fort Worth from the top position for the first time since 2018. A record 28,153 brand new rental apartments are expected to be finished in N.Y. before the end of the year—nearly 50 percent  higher than the number of apartments that were completed throughout the metro in 2021.

Los Angeles is expected to come in at no. 10 of top metro areas, delivering an estimated 11,536 units by year’s-end. Lower on the list, San Francisco is expected to deliver 7,399 new apartments this year.

San Jose, Boston and Kansas City were all knocked out from the top 20 this year amid area slowdowns.

When it comes to new apartment construction already completed this year, Houston leads the country with 4,746 units, followed by Austin and Seattle. Los Angeles came in ninth with 2,204 apartments completed. San Diego was the only other California city on the top 20 list, with 1,427 units.

More People Are Moving In Than Out Of Drought-Impacted Cities