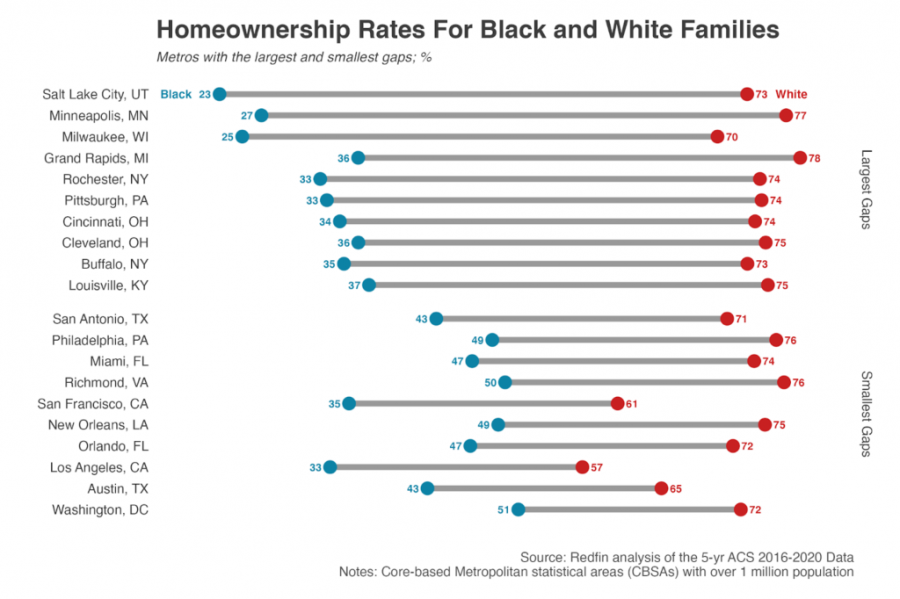 The homeownership rate for Black families has technically improved over the pandemic, but remains far and apart from that of white families.

According to new data out from the U.S. Census Bureau, reported by Redfin, just 44.7 percent of Black families nationwide own their home, up slightly from 44 percent before the pandemic began. That’s compared to 74 percent of white families, up from 73.7 percent pre pandemic.

The homeownership gap between Black and white families–29.3 percent–has also barely changed over the last decade.

“The good news is that the Black homeownership rate didn’t decline during the pandemic, even though Black Americans were hit hardest by coronavirus-related layoffs and are recovering slower financially,” said Redfin Chief Economist Daryl Fairweather. “But that’s only a glimmer of hope in a flawed system, where Black families are at an unfair financial disadvantage due to the legacy of racism and discrimination that has caused several generations to miss out on building wealth through homeownership.”

Per Redfin, Washington D.C. and Birmingham had the highest Black homeownership rates in the U.S. at 51 percent. They’re followed by Richmond, New Orleans, Philadelphia and Atlanta.

Just 23 percent of Black families in Salt Lake City own their home, the lowest Black homeownership rate in the country. That’s followed by Milwaukee, Minneapolis, Las Vegas and San Diego.

“It’s worth celebrating the fact that the real estate wealth held by Black Americans is on the rise, and hopefully that wealth will strengthen Black communities” Fairweather said. “But unfortunately, because most Black Americans don’t currently own a home, most of them aren’t earning money through homeownership. Moving forward, the public and private sectors should work together on a major policy overhaul to help Black families buy homes, as that is one of the most important steps in reducing inequality in this country.”