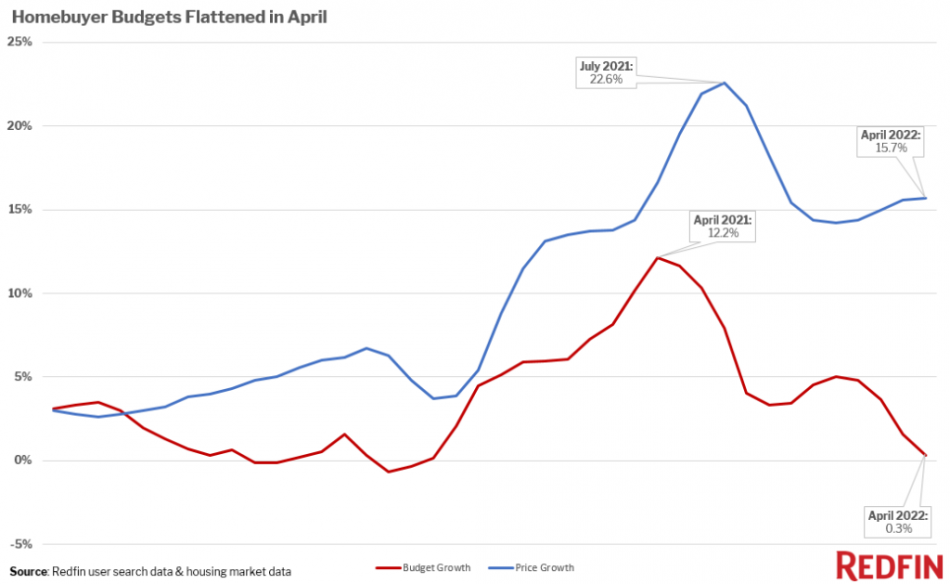 Redfin is out with new numbers highlighting homebuyer budgets are essentially flat from last year. Examining the average maximum price set by Redfin.com users in their online home searches, budgets were up just 0.3 percent year-over-year nationwide in the three months ending April 30.

That marks the slowest growth rate since June 2020.

According to Redfin, budgets hit peak growth at a rate of 12.2 percent in April 2021—three months before home-sale prices hit their peak growth, increasing a record 22.6 percent year-over-year in July 2021.

Redfin economists expect the cooldown in budgets will lead a cooldown in price growth by two-three months, too. Another indicator that prices are already being adjusted: 21 percent of home sellers dropped their asking price in the last four weeks–up from 10 percent a year earlier.

“When mortgage rates go up, buyers’ budgets go down,” said Redfin Deputy Chief Economist Taylor Marr. “And when buyers’ budgets go down, sellers have to meet buyers where they are. Budgets haven’t fallen from a year ago and we don’t expect home-sale prices to fall, either. But the fact that budget growth has slowed so significantly is one sign among many that home-price growth will continue to slow as the year goes on.”

Escape The City And Find Luxury Farm Living In Moorpark