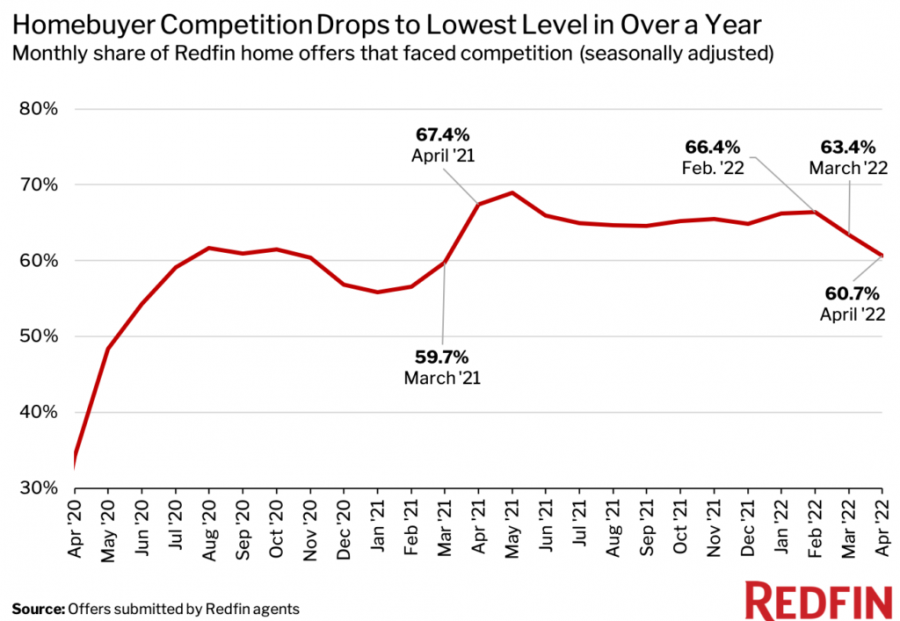 Inventory may still be tight in most parts of the U.S. but Redfin analysts report a second-straight month of homebuyer competition. In fact, locally, Riverside is hitting some unfortunate high marks, in particular…

First, the national outlook: 60.7 percent of home offers written by Redfin agents encountered competition on a seasonally adjusted basis in April, the lowest level since March 2021. That’s down from a revised rate of 63.4 percent a month earlier and 67.4 percent a year earlier.

(FYI: An offer is considered part of a bidding war if a Redfin agent reported that it received at least one competing bid.)

The drop-off further signals a market slowdown, particularly in some SoCal regions.

In Riverside, 42.7 percent of home offers written by Redfin agents faced competition in April, down from 64.6 percent a year earlier. That 22-point decline was the largest among the 36 U.S. metropolitan areas in the study. San Diego had the fourth-largest decline, with 70.7 percent competitive offers in April 2022 compared to 85.7 percent in April 2021.

“The meteoric rise in mortgage rates is prompting more house hunters to back out of the market, causing competition to cool,” said Redfin Chief Economist Daryl Fairweather. “Higher rates are also limiting homebuyers’ ability to significantly bid up home prices, meaning some homes aren’t selling for as much over the asking price as they would have a year ago. This could help set off a slowdown in home-price growth in the coming months.”

Worcester, MA had the highest bidding-war rate, at 76.9 percent, followed by Denver, Boston, Providence and Detroit.