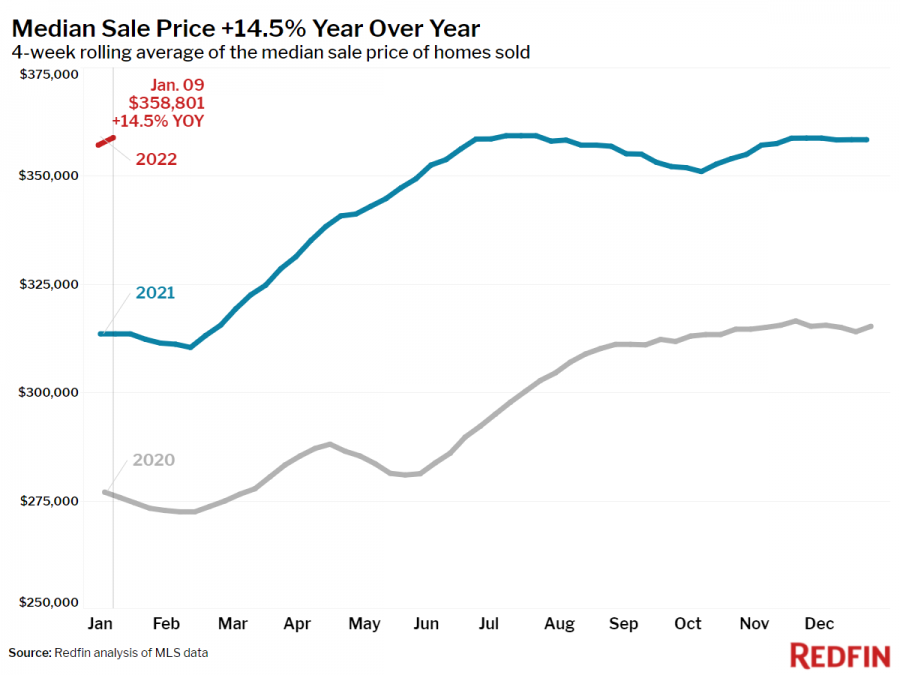 January 2022 could end up being the most competitive month in housing history, according to new data out from Redfin. Home prices have hit an all-time high in the first 10 days of the new year—and analysts predict continued increases from here.

For the week ending January 9, the median home sale price surged 16 percent year-over-year to an all-time high of $365,000.

“The stage is now set for the most competitive January housing market in recorded history,” said Redfin Chief Economist Daryl Fairweather. “Buyers are pouring into the market to claim a home before mortgage rates rise further as new listings slow to a trickle. The conditions are becoming increasingly challenging for first-time homebuyers, who will have to compete against more experienced buyers who are willing to do whatever it takes to win. But I expect that by the time mortgage rates increase to 3.6%, competition will settle down quickly to levels similar to late-2018.”

The median asking price of newly listed homes increased 12 percent year-over-year to $344,190 over the same time period. However, new listings were down 11 percent from a year earlier.

Compared to the same week in 2021, 29 percent of homes that went under contract had an accepted offer within one week of hitting the market, up from 25 percent a year earlier.

Listing of the Day: Orange Estates in Downey

I am glad that I moved out of California.  I now live in Arizona.

Powered by Forym
No Result
View All Result