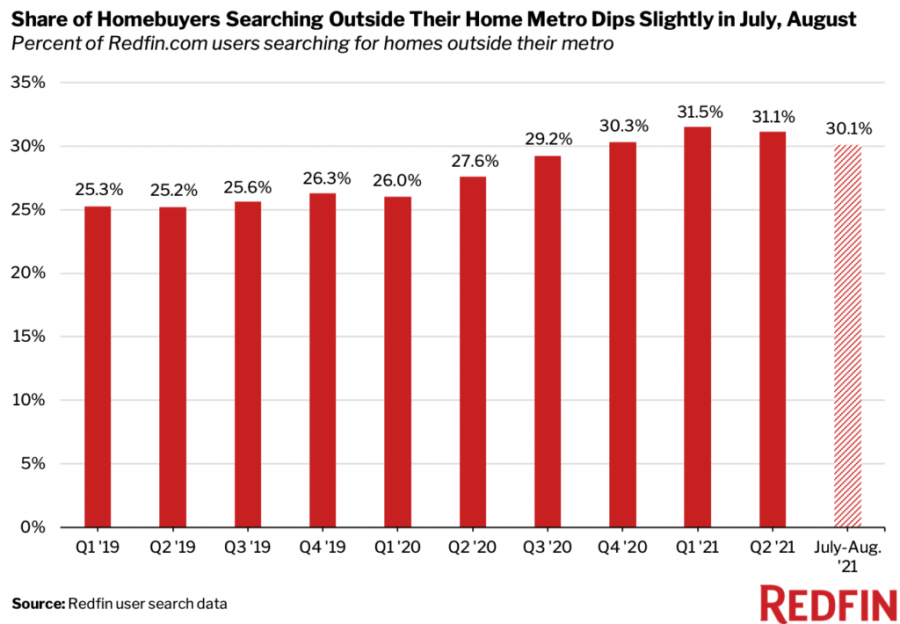 At the start of the year, nearly 32 percent of Redfin.com users reported interest in relocating to a new metro area, a peak for the data set. Midway through 2021 and that interest dipped slightly, according to new numbers out from Redfin.

Nationwide, 30 percent of Redfin.com users looked to move to a different metro area in July and August. That’s still up from 28.7 percent during the same two-month period in 2020.

“We’re not seeing the level of movement we saw at the end of 2020 and the start of 2021, but a lot of people are still looking to move to new cities,” said Redfin Lead Economist Taylor Marr. “Worker turnover is one reason interest in relocating remains high. Scores of Americans are quitting their jobs in search of better salaries, benefits and flexibility. Once they find their next gig, people are often able to move for affordability or a better lifestyle.”

The migration analysis is based on a sample of about 2.7 million Redfin.com users who searched for homes across 120 metro areas in July and August. To be included in this dataset, a Redfin.com user must have viewed at least 10 homes in a particular metro area, and homes in that area must have made up at least 80 percent of the user’s searches.

According to Redfin, Sacramento, Phoenix, Las Vegas, Miami and Tampa were the most popular migration destinations in the U.S. in July and August. San Francisco, Los Angeles, New York, Washington, D.C. and Boston saw more Redfin users aim to leave than any other metro areas in July and August.